In battle for best NY pitcher, Cole is the pick over deGrom 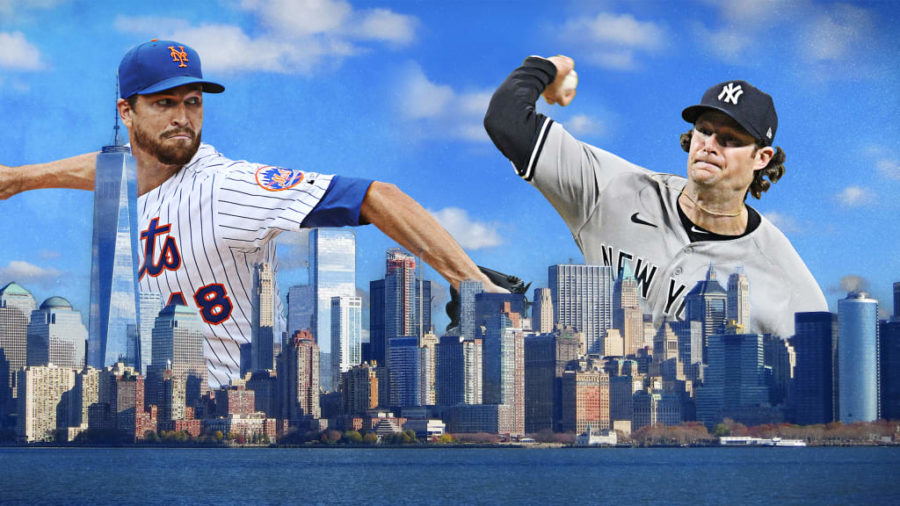 Let me make clear how much of an honor and privilege this is to even write about these two future Hall-of-Fame pitchers, who are clearly the best in the game now and dominate in every start they make. I do not take it for granted that I can watch these two pitch once or twice a week.

Yet, if I was forced to pick which one I would rather have on my mound, give me Gerrit Cole by an inch — the same inch the hitters usually miss his pitches by.

This is a common debate topic among New Yorkers. Clearly the two best pitchers in the Major Leagues, by a wide margin, you can’t go wrong with either one. But in the end, it’s the Yankees fans who have the edge over the Mets fans as Cole is slightly better than deGrom.

Since 2018 heading into this season, Gerrit Cole had a staggering 42-13 record over his two seasons in Houston and his first in the Bronx, four more wins than any other pitcher in baseball over that time. Over the past three seasons, deGrom has a 25-19 record in just one fewer game than Cole has played in. Yes, deGrom does not have much run support or defensive help behind him, but since last season, the Mets are averaging 0.52 errors per game in the field while the Yankees are averaging 0.78. Since the 2020 season.

While deGrom has a better ERA over the past three years than Cole does (2.10, the best in baseball over that span, to 2.72, the fourth best), deGrom has had the luxury of pitching in a DH-less league in 2018 and 2019. Cole has had to pitch in a league where pitchers are not hitting and there are players whose only job it is is to figure out how to get a hit, which could account for Cole’s higher ERA than deGrom.

Since 2018, Cole has more strikeouts than anybody in baseball, including deGrom who stands at third. Cole is the much better strikeout pitcher, and in 2019 led baseball in fastball velocity at 97.1 MPH. That, combined with his preeminent spin rate, usually leaves batters flailing helplessly.

Jacob deGrom does have two Cy Young Awards, and a third-place finish last year, to Cole’s zero, but Cole has finished top five the past three years, but that may be explained by tougher competition in the American League. deGrom has only had to deal with Max Scherzer and in 2020 Trevor Bauer while Cole has dealt with the likes of Blake Snell, Justin Verlander, Corey Kluber and Shane Beiber in the Cy Young voting.

In the end, it all comes down to what you do in the playoffs. Cole has won seven postseason games since 2018, which is the most in MLB. He went 2-0 last season in the postseason for the Yankees, and struck out 30 batters in 18 ⅔ innings pitched.

Compared to deGrom in their postseason careers, Cole has a lower ERA, five more wins, and more strikeouts per nine innings. In the biggest games under the brightest lights, Cole has shown out stronger than deGrom.

And in a world where analytics dominate, one that seemingly does not add up makes the most sense: 45, in this case, is greater than 48.