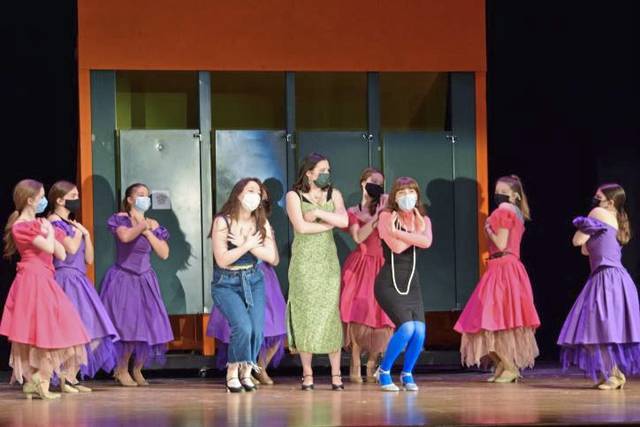 Just like every other year, Shaler Area High School put on a successful spring musical. This year, the directors, cast, crew, and pit came together to run four performances of The Wedding Singer, the musical version of the 1998 Adam Sandler movie. That would be normal, but this year has been anything but normal. The show was never guaranteed to happen, but, miraculously, it did.

Putting on a musical during a global pandemic presents some interesting challenges: are the actors allowed to sing indoors? Is the pit allowed to play their instruments indoors? Is anyone allowed to come see the show? On top of that, Shaler welcomed an entirely new directorial staff for this production, including director Mr. Anthony Martello, assistant director Mrs. Jennifer Birch, and pit conductor Mrs. Cyndi Mancini. Even despite these challenges, though, Shaler was able to perform four shows, with a small in-person audience and a larger audience watching via livestream.

“Coming into a new environment can be intimidating, but I felt very supported and welcomed by everyone, staff and students alike,” Director Mr. Martello said. “I absolutely feel like the show was a success.”

That feeling is shared by the students who took part in the production. 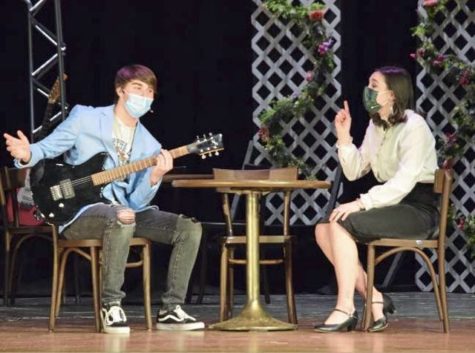 “Our dedication in rehearsals was only part of our success,” student director Frank Babicka said. “Our true success lay in the community that was created through time spent together. We put on a good show because the people standing next to us, both on and off the stage, deserved to be part of a good show.”

Pulling off a high school musical always takes the combined efforts of many different people, and that was especially true this year. From the students involved to their parents to Mrs. Thiel and Mrs. Miksic in Activities, a large group of people came together to make this show happen.

“The parents of the cast make so many things possible for the program,” Mrs. Birch said. “This year, they worked extra hard to make everything feel as close to normal as we could get. I owe them a debt of gratitude that I’ll never be able to pay. SATV was also integral to the show this year in a new and deeper level. Without them, no one at home would have been able to see the show!”

The students in cast, crew, and pit all worked tremendously hard to bring this musical together. The cast was able to adapt to performing in masks with more spaced-out blocking. With only three weeks of rehearsals, the pit was able to learn all their music and how to stay in sync with the actors onstage. The stage crew, supervised by Mrs. Loudon, took on a greater leadership role in designing the set, creating costumes, and running the lights and sound than in previous years.

“The crew on stage had maybe 6 total students to move a ton of sets- that in and of itself is a mini miracle. The booth was all student-run, and even though it scared me to give students that much responsibility, they really shined,” Mr. Martello said.

For the students, the freedom to take the lead on some of the technical aspects of the show was exciting, although they were glad to have the support of Mr. Zachary Anderson, the technical director.

“I’m glad that we were able to be independent and work on all of the high-tech things mostly on our own. But it was also always nice to know that there’s someone who can help you when it gets stressful!” Emma Wunderlin, who ran the sound board, said.

On top of the success of the performance itself, the musical was also a success financially. Because the last weekend of the 2020 spring musical was canceled due to COVID-19 last year, Shaler’s performing arts program did not earn the amount of funds it usually does from shows, making this year’s musical budget much smaller. Even so, The Wedding Singer stayed within its budget, and the approximately 360 live-stream tickets and 100 in-person tickets sold to performers’ families generated enough funds to cover all costs.

“We are definitely going to start the year off in a better place financially next year, but we still have a long way to go to get to where we were pre-COVID when we had all in-person shows with almost every seat in the auditorium filled,” Mrs. Mindy Thiel, the High School Activities Director, said.

Although (or maybe because) putting on this musical was such an uncertain, exhausting process, seeing the show come to life and be so successful was very rewarding for both Mr. Martello and Mrs. Birch, who both said they would look back on this experience with pride.

“My lasting impressions will be the resilience of a group of teenagers who did what every single adult in their life told them was impossible,” Mrs. Birch said. “They buckled their boots and got to work and made it happen through sheer force of will. I’ll also never, ever forget the support the cast lent one another. In a year that was hard and often horrible, I saw them lift each other up and carry one another when their burdens were too heavy to bear alone. The tears and celebration after the final curtain call showed the love and dedication and deep, abiding friendships that came from this show, and more than anything I can take from this experience, I hope the STUDENTS carry those feelings and this accomplishment with them for the rest of their lives. Someday, someone will ask them to do something overwhelming and impossible-sounding, and each and every cast, crew, and pit member will be able to face that challenge and say, ‘I made live musical theater happen during a pandemic. I can do anything.’”

Martello knows that his first musical at Shaler Area will be one that will be hard to forget.

“I think just the feeling of pride I had when we completed our final rehearsal, with every student on stage looking at me, is something I will cherish for a long time,” he said.