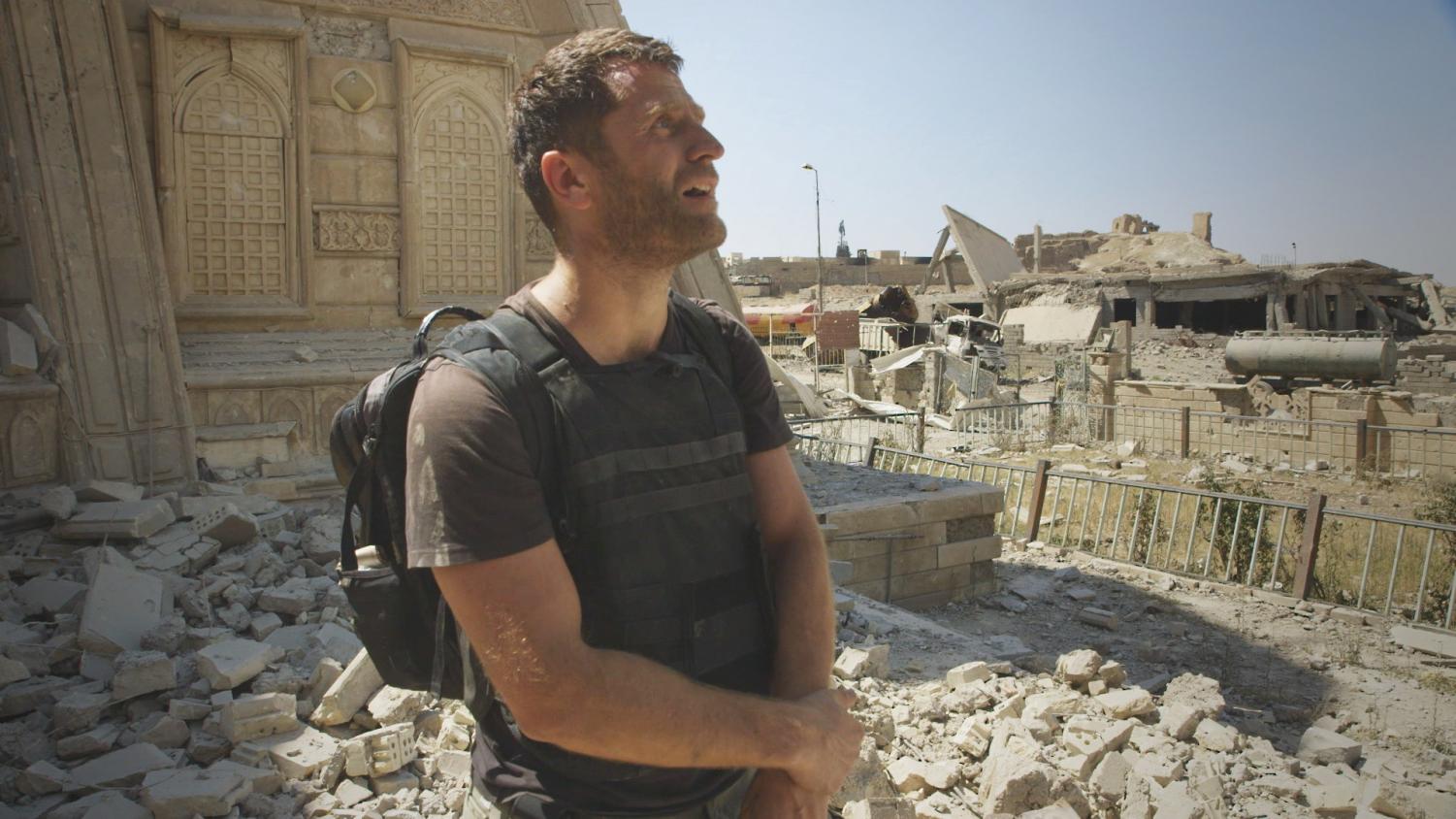 War reporter Ben Anderson shares stories from around the world

“Most trips, in the few days before I’m about to leave, I don’t sleep, I don’t eat, and I imagine everything that could possibly go wrong. I’ve had some real close shaves with IEDs, and snipers, and ambushes, and gunfights. Looking back over the past years, I think I’m lucky to be in one piece.”
That is the life of war correspondent Ben Anderson. From Brazil to the Congo to Afghanistan, Anderson has been there and reported on it. He has been through raging gunfights, risky patrols, sniper battles, and utter destruction, all for the sake of presenting the public with a clear and accurate view of war and its effects on civilian populations.
Anderson has made numerous film documentaries and has reported from nearly every conflict zone in recent history. He began work with the BBC and reported from the notoriously dangerous West African coast. His most notable early work came after former President George W. Bush famously claimed that Iraq, Iran, and North Korea were a so-called “Axis of Evil.” Bush’s security advisor, John Bolton, would later add Syria, Libya, and Cuba to this list. Anderson went to each of these nations to investigate what the people and culture were truly like, calling the documentary series “Holidays in the Axis of Evil.”
“Of course you read everything you can before you go to these places, but the point of going out there is to find out what’s really going on. You talk to people, you hang around, you find out what’s happening, and very often you find out that what is happening is very different from what we’re being told, especially in the buildup to war. Even in countries like Iran and North Korea where you think that everybody is going to be hostile, you find out that they’re really not that different from us… I was really trying to bring out the human element in these big international stories,” Anderson said.

I didn’t quite take on board how dangerous some situations were. I’ve been in these situations so many times that I’ve become numb to serious danger…If you’re talking about doing this for years, I don’t know if you can do it without being in danger.”

Although he has reported extensively throughout the Middle East, Latin America, Africa, and Southeast Asia, Anderson has spent a large part of his career in Afghanistan, specifically in the southern Helmand province. In Helmand, he has embedded with both British and American armed forces to report on the violence in the region.
After years of filming documentaries like “Taking on the Taliban” and “The Battle for Marjah”, Anderson wrote a book on the ongoing struggles in the country called, “No Worse Enemy: The Inside Story on the Chaotic Struggle for Afghanistan.”
“Books are so much more comprehensive than most documentaries, and I’ve seen so much happen over the years, and the patterns were so clear, and what was going to happen [in Afghanistan] was so clear that I felt, even if no one reads this book or it doesn’t have much impact, at least everything I’ve seen is collected in one place and on the record,” Anderson said.
Following the success of his book, Anderson again set out to Helmand to film another documentary. This time Anderson documented the failure of the Afghan government to stand on its own as US forces placed more and more responsibility onto it. He sarcastically titled this piece “This Is What Winning Looks Like” based on a speech by a US marine general.
“I knew that the Afghan security forces were not up to the task of doing this themselves, and I knew that they had all kinds of problems with corruption, as well. So I knew that if I could get there and film the Marines handing over power to the Afghans that it would be chaotic, and it would be a picture of what the war would look like in the not too distant future,” Anderson said.
Not only did Anderson expose the high levels of corruption within the Afghan Security forces, but he also shed light on the rampant drug use and frequent molestation of young boys within the supposedly stable and well-equipped force.
The film helped to show the British and American public that the war in Afghanistan was not going the way that their leaders had explained during press conferences and that the state of southern Afghanistan was not at all pacified.
After years of reporting for the BBC and other news outlets, Anderson joined Vice News as a producer and correspondent. Vice, unlike most mainstream American news networks like CNN, is willing to send correspondents like Anderson to film extended pieces and embed with soldiers during battle and highly dangerous situations.
Vice has filmed inside the Islamic State, interviewed Taliban fighters, and has filmed extended documentaries in rebel-held territory in Libya and Syria. Anderson, during the fall of Mosul, interviewed an ISIS fighter who, without reservations, said he would kill him if he were given the chance.
“We’re willing to take a calculated risk; I don’t think we’re as crazy or reckless as some people think we are. Some people think it’s only a matter of time before someone from Vice gets killed because we just storm into all kinds of situations with no calculations whatsoever. That’s not true. I think we’re just willing to take more risks and spend more time in these places. If myself or another correspondent is going to Syria or Afghanistan, we’re going for three weeks minimum, or possibly five or six weeks for one fifteen-minute piece,” Anderson said.

Even though these risks are calculated, the situations faced by Anderson and fellow correspondents are extremely dangerous. In places like Afghanistan or Iraq, death could be one step away as IEDs are all too common along frequently trafficked roads. Anderson filmed day-long firefights in Marjah, Afghanistan where a bullet from a Taliban sniper came within inches of hitting his head. Despite the fact that Anderson has thus far left these regions with no serious injuries, he has seen many of his journalist comrades killed and maimed in an effort to report the truths of war.
“My friend was on a really routine and fairly boring patrol, Joao Silva, a New York Times photographer. We were in Kandahar [a large city in southeast Afghanistan] together, and it was painfully boring. We were seeing nothing, we were actually trying to get out of there and get to Helmand instead and join the US Marines, but couldn’t. So we kept going out on various patrols, and I went on one side of the river and he went on the other and stepped on an IED and lost both of his legs,” Anderson said.
Although Anderson has come out of these zones of conflict physically unscathed, he does suffer from Post-Traumatic Stress Disorder after years of being surrounded by constant violence and conflict. He has participated in regular therapy for years but has recently tried experimental, government-approved MDMA and Ketamine therapies. Unfortunately, all of these have thus far been unsuccessful.

“My PTSD, I think, had led to a kind of numbness when I was in these situations. I probably took on risks I shouldn’t have taken because I didn’t quite take on board how dangerous some situations were. I’ve been in these situations so many times that I’ve become numb to serious danger. I just always went ahead, no matter what, and I never said no to anything. If you’re talking about doing this for years, I don’t know if you can do it without being in danger,” Anderson said.
Even through his PTSD, Anderson has continued to film and work. More recently, he has begun to cover war’s effects on civilian populations and has had less of a focus on combat and violence in his reports and documentaries. His work in the former ISIS capital of Mosul, Iraq featured the reunification of families and civilians crying tears of joy as Iraqi governmental forces slowly took back sections of the large city.
Although the rise of mass communication has allowed humans more access than ever before to contemporary film and writing on global conflicts, it doesn’t seem that we have always taken advantage of this. Anderson and his fellow journalists’ work is only a few clicks away, but it seems that much of the modern world seeks a tweet or a headline rather than the unadulterated facts of a conflict.
“I think people are losing the ability to basically read and study issues. Yes, The New York Times gets it wrong now and again, but it’s largely reliable. But that’s just a starting point, you’ve got Wikipedia, you’ve got books. Despite the bad state of the US news media, it’s a golden age for writing… This stuff is all out there, it’s just not widely read. I don’t think it’s that hard to educate yourself about what’s really happening and what the basic facts of these conflicts are. And that enables you to put serious and intelligent pressure on elected officials,” Anderson said.
Regardless of the effect that it has to the general public, Anderson is always planning his next report. He has future plans in Burkina Faso, a West African nation that has recently seen conflict arise. Anderson has a passion in awareness, and it does not seem that that passion has let up during his long career. He has found his purpose in the world’s worst places, but despite this he has never given up the thankless work that has come to define him and this current generation of conflict journalism.

The Oracle intends for this area to be used to foster healthy, thought-provoking discussion. Comments are expected to adhere to our school standards of Pride, Respect and Honor. Any criticism is welcome but should respectful and constructive. As such, we do not permit the use of profanity, foul language, personal attacks, or the use of language that might be interpreted as hurtful or libelous. Comments are reviewed and must be approved by a moderator to ensure that they meet these standards before publication. The Oracle does not allow anonymous comments, and The Oracle requires submission a valid email address. The email address will not be displayed but will be used to confirm your comments, if needed.
All The Oracle Picks Reader Picks Sort: Newest